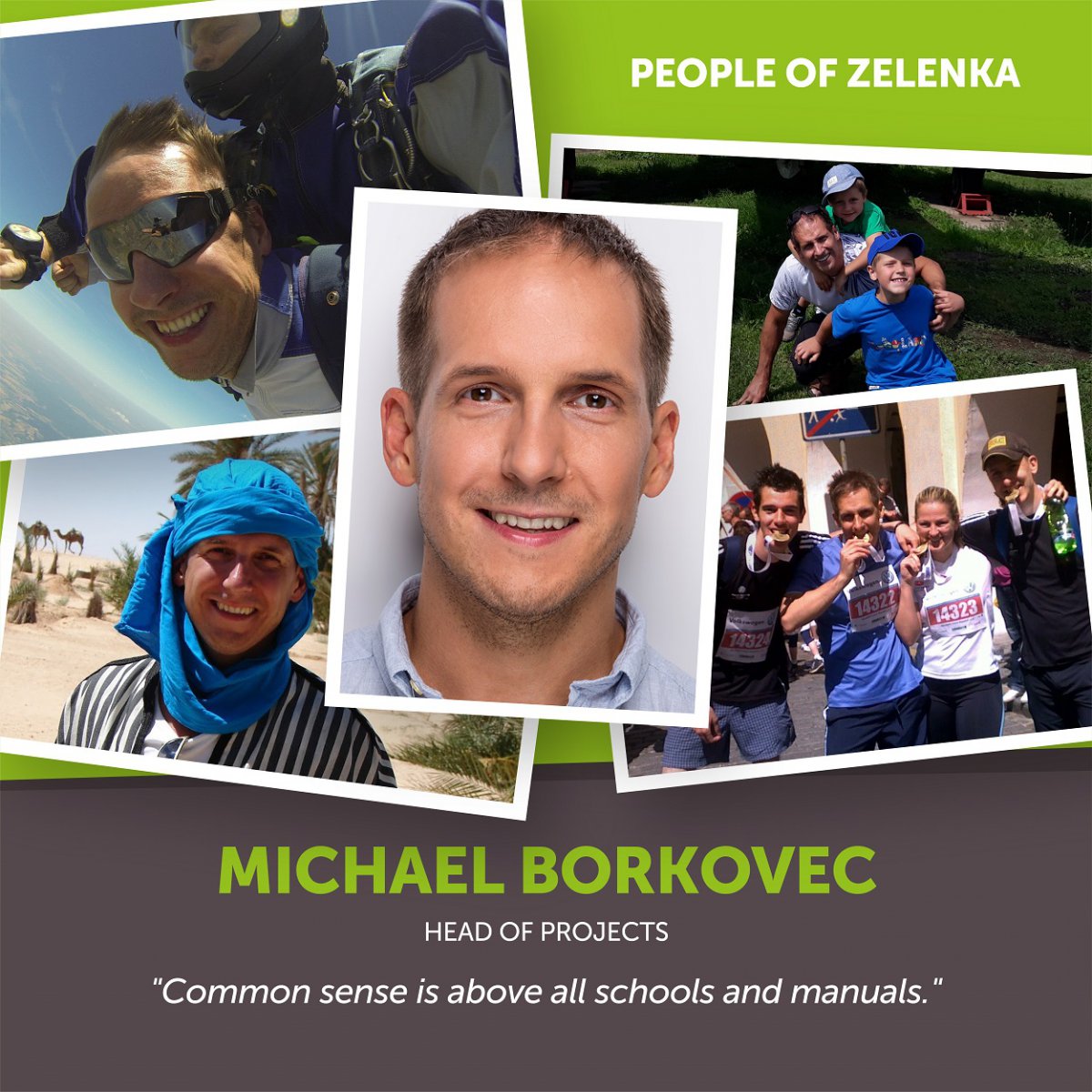 “I’ve actually been at ZELENKA for 15 years?!” is Michael’s rather incredulous response to his profile. “I came on board in the era when there were seven of us, in just three small offices.”

Right from the start he proved to be a powerhouse—clearly spurred on, not stopped by obstacles.

He began as an IT administrator and project manager. For a few years he also held the post of quality manager, later becoming Head of projects. As the company grew and new departments were established, he was put in charge of the English team as well.

That was really too many roles for one person to fulfil. Fortunately, as he notes: “Our team began to grow and include other capable people, so I could pass on my roles to them one by one. This meant I could concentrate on being the Head of projects.

To this day, I am available as a backup for those transferred roles, so I have a good grasp of how all the departments function. I also still work as a PM. This enables me to really keep in touch with my teammates’ roles and to lead and help them all the better.”

What’s his specialty, and which part of his work makes him the happiest?

“Even though I’m the Head of projects, most of the time I work with orders for English-speaking customers—mainly from the USA. Naturally, I enjoy it when a project is successfully concluded. However, what I love most of all is when I can help someone out of a sticky situation.”

When asked what his greatest challenge was, he answers immediately: “I still remember one autumn evening over 10 years ago. After an intensive few hours, I still hadn’t managed to find a translator into Russian for an enormous order with a very tight deadline. Then fate smiled upon me! One translator I addressed answered almost immediately and got me out of that tight spot by providing everything on time. Today, even though he’s from Ukraine, we are close friends and see each other regularly.”

“That’s easy. My dream project is one that doesn’t end with the invoice, but one that leads to long-term, satisfied cooperation. More importantly, one where our customer treats us as an equal partner, rather than just a supplier, and acts towards us accordingly.”

He makes no bones of being competitive, both at work and when running, swimming, or bodybuilding. “I also make sure I never miss out on the Best Lawn in the Neighbourhood competition! :-D,” he adds.

“I’ve learned many things at ZELENKA, the most important by far being: If you want to win, you can’t afford to think only of yourself. You have to learn to work in a team and then know how to share the joy of success.”

Tomas has been a Project Manager here for just over two years. He’s quite the joker – and athlete –… (read more)

Right at hand for you over the holidays once again!

If your needs for translation projects stretch into the holidays, we’ll be here for you on December… (read more)

This November, we’ll be at Stuttgart’s tekom fair yet again!

We’re thrilled that after two “online” tekom fairs, this year tekom will once again be held at… (read more)

“I’ve been at ZELENKA since 2007, and right away I was pleasantly surprised at how nice the… (read more)